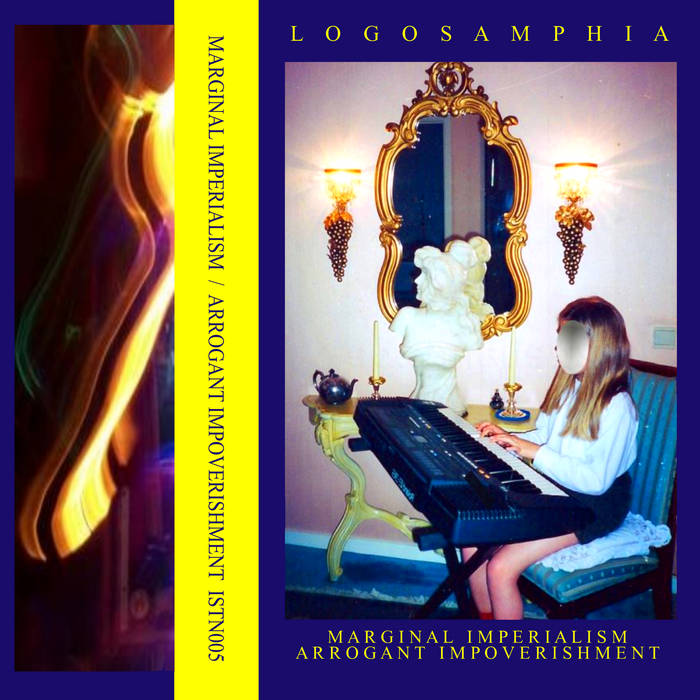 I remember discovering Logosamphia, a Rotterdam-based producer with Iranian origin, back when the Myspace was still at its peak (around 2008). I believe it happened thanks to Yan Hart-Lemonnier, a chief of Ego Twister Records (also contributing by mastering this tape release), who put Logosamphia in one of his mixes; it could also be that I unearthed it through one of myspace’s "top friend" connections, my preferred way of digging out music from the web those days. In any case, it caught my attention almost immediately. It certainly was rooted in the breakcore genre, having amen breaks and sometimes gabba kicks, but at the same time there was some genuine element to it making Logosamphia seem a completely separate phenomenon with its own inimitable sound. Surely, it was all about those motoric beats constantly rushing forward as if they never wanted to stop (as a result of which I used to include Logosamphia in almost every mix I had been targeting for the dance floors); or maybe it was about the mixture of pumping bass, balkanic 8-bit melodies and highly repetitive mutated voice scraps, creating a disturbing effect behind the scenes.

From that moment on I've been closely following all of Sadra Hemati's (his real name) musical activities, witnessing his releases on labels like Ego Twister, Darling Dada, Metronomicon Audio and Enfant Terrible plus tons of stuff released on his own. What I observed over the time is that more and more oriental motifs began to surface while beats started moving from 4/4 dancey rhythms to more complex patterns turning Logosamphia's music even more interesting. And then there's the "Omni Passage" cassette, totally distinct one, containing four very quiet ambient pieces played on Omnichord - a kind of follow-up to this work you can now find on side B of "Marginal Imperialism / Arrogant Impoverishment".

In essence, what Sadra brings to Istotne Nagr. is a split release with himself: side A is filled with classic Logosamphia trademark sound, brighter and more upbeat while the side B is a collection of 100% hardware jams recorded all in one take. It’s more focused on moody, melancholic melodies (hello again Omnichord!), very minimalistic and slowly flowing, sometimes accompanied by noisy glitches percolating back and forth between the background and the foreground. These fourteen tracks are my selection out of over five-hour long recordings Logosamphia sent to me after I proposed releasing this tape.

You can find more Logosamphia works on his bandcamp page: logosamphia.bandcamp.com

All tracks produced & written by Sadra Hemati, except track "Brubeckian Walk" written by Paul Desmond
Cover artwork by Sadra Hemati
Mastered by Yan Hart-Lemonnier (merci! we love you!)
Many thanks to Groot Verzet for unconditional love and support.
And a thank you to Sadra's Mom&Dad + Aunt khalle Zahra for their support and translation skills.

Bandcamp Daily  your guide to the world of Bandcamp