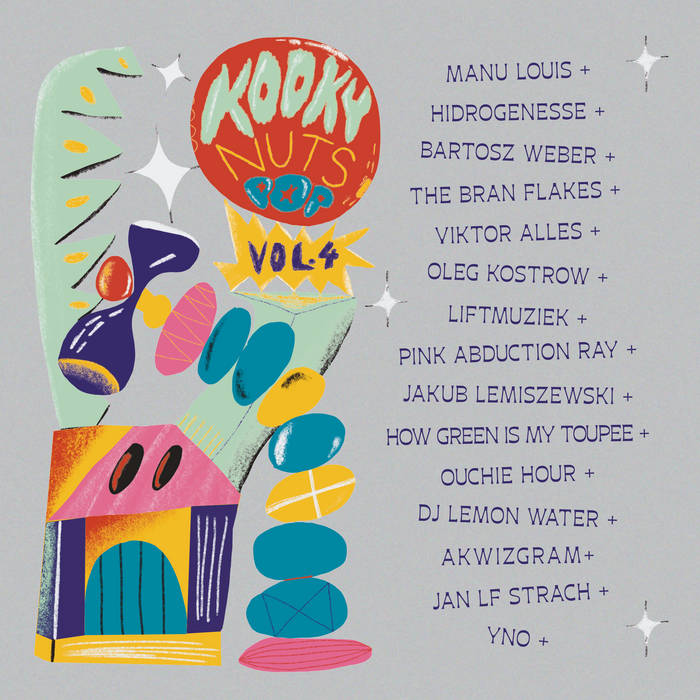 carlosmetropoli Best everything duo from this millenium, fun, corky, dancy pop at its best. Hidrogenesse is everything wrapped up in a song. Favorite track: Hidrogenesse - ¿De qué se ríen los españoles? (edit).

For the fourth year in a row, a selected team of talented musicians has come together to write a new chapter of the one and only anthology of "kooky nuts pop". Are we thus any closer to knowing what this species is? What are the hallmarks of this made-up genre and where are its boundaries? Or have we reached a point of eclecticism overdose, where it manifests nothing more than the personal taste of the series' curator? Either way, while the number of regular listeners is rather small, some expectations can come into play, and I just hope volume 4 will meet everyone's demands regarding kookynutsiness, irrespective of its definition.

This new bundle of tracks may be a bit smaller than the previous ones, but is rather clearly structured in terms of mood. First goes the "pop" part with the funky performance of Manu Louis and playful melodies from the Catalan duo Hidrogenesse. Then we meet the true heroes of the cut-up: The Bran Flakes and Oleg Kostrow (of the legendary Messer für Frau Müller), who delivered not one but four short "skit" tracks for the mix. Also pay attention to that tasty piece of French electro from Viktor Alles and to Bartosz Weber’s (of Baaba and Mitch & Mitch) rhythmically twisted, yet minimalist composition. The “faster beats” section is represented by our finest footworker Jakub Lemiszewski and the breaks & wobbles maestro Pink Abduction Ray. The beginning of side B takes us straight to the chillout zone with the housey upbeat cuteness of Ouchie Hour, the bleepy skweee of DJ Lemon Water (also known as Lavender Worm) and the seducing basslines of Liftmuziek. After that comes a really kooky pair: YNO’s tune, which might as well be part of Eraserhead's "In The Radiator" cabaret repertoire, followed by How Green Is My Toupee’s special blend of synthwave and weird beats. Finally, we end up with the gloomy drums of Akwizgram and the deep lo-fi basement jam by Jan LF Strach.

So much fun from such a small cassette box! All I can say to wrap up this introduction is enormous THANKS to all the artists involved for letting me build this compilation with their lovely works!

The Bran Flakes (US)
www.thebranflakes.com

How Green Is My Toupee (HR)
howgreenismytoupee.bandcamp.com

Bandcamp Daily  your guide to the world of Bandcamp